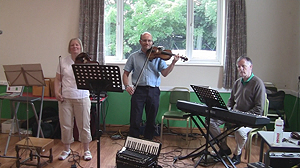 In the Folk world I started as a singer/guitarist, but these days I'm a dancer, caller, teacher, musician, choreographer and tune composer.  (I'm separating caller and teacher because many people call dances but very few teach people how to dance, and I try to do both.)  I've played guitar with Kafoozalum and Blue Mountain Band; piano with Ad Hoc, Knotted Chord and various unnamed bands; tambourine (for just one dance) with Bare Necessities.  I lead The Round Band in Cambridge about five times a term, sometimes lead the band for Cambridge Contra, and play in the band for Histon Folk Dance Club, also in Cambridgeshire.  On rare occasions I call and play piano simultaneously.  Click on the image to see a video of me playing in Knotted Chord in 2019.

It's not all high-level stuff.  I started mainly calling Barn Dances or Ceilidhs, though I do hardly any of that now.  For many years I helped run the “Beginners” session every Thursday evening at Cecil Sharp House in London.  I called for twelve years at the Stafford Music Day, where my job was to persuade musicians to dance while other musicians are playing.  And I enjoy calling Children's dances.

If you want more specific information, either contact me or read on…

There are lots of people calling dances in England, but very few teaching people how to dance.  One common excuse is: “People don't come here to be taught — they'll pick it up as they go along”.  But they're as likely to pick up the wrong way of doing it as the right way.  I believe that learning some dance technique makes the dancing more enjoyable — for you, your partner and the whole set.  I have run technique sessions with many different titles and focuses, including: “Getting there at the right time”, “How to enjoy Playford”, “Dancing in a Set”, “Enjoy Dancing Better” and “The Music Will Tell You”.

John Playford published the first book of English Country Dances in 1651.  There were set dances for two, three, four couples, squares, unusual formations, as well as longways for as many as will.  I find the set dances (often with three different figures) more interesting than the longways which took over as time went by, though in the States they much prefer the longways dances.

Cecil Sharp did a wonderful job of interpreting the Playford dances and bringing them back to life, but like all pioneers he didn't always get it right.  Since then people such as Pat Shaw, Tom Cook and Charles Bolton have produced their own versions of early dances, and I'm following in their footsteps.  In 1995 I published my book “Playford with a Difference, Volume 1” which not only set out my versions but explained how I came up with them.  There never was a Volume 2 because by then a website seemed the best place to publish newer interpretations.  See many of them here.  The workshop is not aimed at people who want to do their own interpretations, but rather at dancers who are willing to try a different version from the one they're used to, and interested to hear a little about why I think my versions are more likely — without my turning it into a lecture.

In Playford's day the dances were all danced rather than walked; they were lively dances for young people.  There's a tendency now in England (and even more so in America) for all the dances to be walked, and this gives a totally false impression.  This workshop (or preferably evening dance) aims to get people moving, using genuine Playford dances perhaps presented in the way they would originally have been done.  Read the notes.

Dances with a Step

The “Dancing English” were once known for their use of steps, but these days everything tends to be walked.  In this workshop I look at steps as well as dances.  Rant, polka, pas de bas, single-skip, skip-change, slip and waltz will be taking their place alongside the dance walk (which will also be given a wash and brush up).  The idea is not to exhaust you with one or more whole sessions of rants and polkas, but to remind you of the variety available in English Country Dance.  The dances will be interesting, including one or two Scottish, not all energetic, to show that the use of steps can add to your enjoyment of dancing.  Read the notes.

If you really  want something different, I can teach the minuet step.  Minuets were the “serious” dances of the 18th century, with one couple performing and everyone else watching — towards the end of the evening they let their hair down and danced some country dances.  But there are also country dances involving a minuet step, and that's what I teach.  Read the notes.

Scottish dancing is lively and fun, and there are so many good Scottish dances that the average English dancer never meets.  Many of the figures are the same as in English Folk Dance, but the style is different.  The workshop concentrates on dances rather than steps.  Read the notes.

For squares I can talk about their history and development, explain the basics, tell people traps to avoid, and call New England and Southern squares plus my own and the inventions of modern composers such as Ron Buchanan.  For contras I can teach giving weight and swinging, explain about end-effects, discuss twirling and not twirling, and call a great variety of contras from traditional to modern, including triple minors and proper contras as well as the ubiquitous “swing everyone in sight and never stop moving” modern contras.

Contras and Squares without a Walkthrough

I give five or ten minutes' advice on how to deal with things — the rest is solid dancing.  I do medleys for both squares and contras — don't want people learning the figures!  Read the notes.

End-effects are the strange things which happen when you reach the end of a longways set — particularly an American Contra.  Rather than giving specific information for each dance I give five rules which should help the dancers cope with any end-effects they may come across, illustrated by some unusual and interesting contras — in short sets!  Read the notes.

Modern Western Square Dance (MWSD) developed from traditional square dancing but went much further.  There are hundreds of new figures, and you have to go to a series of classes to learn what to do at each level.  I don't pretend to be a MWSD caller, but I can introduce the basics, show how the style differs from the traditional style, and teach a few of the nice MWSD breaks like “Tea-cup chain” and “Grand Sweep”.  Read the notes.

Dances by a specific choreographer…

This workshop (or series of workshops — I have enough material for several) traces the development of dancing in America from English-style country dances through Cotillions and Quadrilles to traditional squares and contras of the 1950s and on to modern squares and contras.  Read the notes.

This workshop (or series of workshops — I have enough material for at least two) examines the connections between Playford-style, English traditional, Scottish, Irish Set, American Contras and American Squares by focusing on figures common to many dance styles which grew from the same branch of the tree.  Read the notes.

My preference is for two sessions, maybe on two consecutive Sunday afternoons.  That means I can talk and discuss things on the first session, to give the participants something to go away and think about and practise.  In the second session I give people the chance to call a dance, with the option of on-the-spot feedback.  Read the notes.

If you've ever looked at the original Playford notation, or indeed most books of dances from the 17th and 18th century, you will be aware that they are in need of interpretation (or reconstruction, as they say in the States).  The instructions are very condensed, with lots of errors, probably intended as a quick reminder to people who already knew the dances.  I have led several workshops where I talk about this, give rules and examples, and perhaps invite the participants to work out their own interpretations and try dancing them.  Read the notes.

I explain how I compose dances, talk about Style, Format and Music, analyse what makes a good (or a bad) dance, and get a bit mathematical about the progression.  Then people have the chance to get together in groups and write a dance, which we try out, discuss, and tweak as necessary. Read the notes.

This workshop depends very much on what the people attending want.  I can talk about building up tunes, making them hang together without being too repetitive, thinking of how the tune fits the dance, and suggestions about keys and bars.  I can also talk about what chords to use, with practical examples.  I can then give people a chance to write their own tunes, and offer suggestions as necessary.  Read the notes.

Colin Hume started his folk career as a singer/guitarist, and has performed his own songs on national radio and at the Royal Albert Hall.  He then discovered Folk Dancing.  Over the last forty years he has built up a reputation as a caller of American Squares, Playford-type dances (English Country Dances in 17th century style), and his own “Dances with a Difference”, many of which contain unusual combinations of figures to baffle and/or delight the dancers.  His tunes are also different enough to make most bands stop and think.  He has published five volumes of “Dances with a Difference”, three with corresponding recordings, two volumes of the American-style “Squares with a Difference” and one “New Dances for Old” of Playford-style dances to existing recorded tunes.  His book “Playford with a Difference” contains his own interpretations of a number of country dances published in the 17th and 18th century by John Playford and others, and is unique in giving the original wording plus discussion of the various possible meanings of the descriptions and a justification of how he comes up with his own reconstruction.  His versions are now danced on both sides of the Atlantic, and he leads workshops on the subject.  He believes that dancing is to be enjoyed and that dancers will enjoy it more if they are taught some dance technique, and he was one of the founders of GUSTO (Grand Union Structured Training Organisation) which was set up to run training courses for EFDSS (English Folk Dance and Song Society).

Colin calls at many Folk Festivals and Folk Dance Clubs, and for nine years helped run the “Beginners” sessions at Cecil Sharp House in London every Thursday.  He has called at Folk Dance courses in Holland, Germany, Switzerland, Denmark and Canada, and for Dance Weeks in the U.S.A. at Pinewoods in Massachussetts, Mendocino in California, Brasstown in North Carolina and Buffalo Gap in West Virginia, plus a week of Dancing down the Nile in Egypt.  For many years he contributed a regular column to the EFDSS magazine “English Dance & Song”, containing his thoughts on many aspects of the Folk Dance world plus dances by himself or others.

Colin is too outspoken to be everyone's favourite caller, but will appeal to dancers who appreciate an entertaining and varied session including some fairly complicated dances without the reverential attitude to Playford, Tradition or EFDSS that some people adopt.

Click here for a zip file containing a larger picture of Colin for your publicity.