It's a pity that there is so little communication between the various branches of Dance: often the people involved in one kind have no knowledge of any other.  My background is English Folk, but when I lived in London I sometimes went along to Pont Street, centre of Scottish Dancing in London, and enjoyed the dancing there.  From about 2004 to 2010 I danced Scottish much more regularly, in Cambridge.

Scottish dancing is lively and fun, and there are so many good Scottish dances that most English dancers never meet.  Many of the figures are the same as in English Folk Dance, but the style is different.  Scottish dances are all danced; there's no walking.  In addition to skip-change and slip-step, there's the slower and more graceful Strathspey step.  We'll have a go at that, though the workshop will concentrate on dances rather than steps.  All too often, English dancers are prepared to walk (or plod) through the dances, and the caller has difficulty getting some of them to dance for more than eight bars.  On the other hand there's more variety in the steps of English dances.  We don't have a Strathspey step, but in addition to skip-change and slip we can offer step-hop, rant, waltz, polka and the dance walk (which needn't be a plod, and can be very satisfying in the stately Court dances of the 17th and 18th centuries).

Having said all this, when you look at the actual figures used in the dances the common background of the two forms is obvious.  We say stars where they say wheels and teapots; we say circular hey where they say rights and lefts, and we also have circles, reels and many other figures in common.  The style of dancing is different; the dances themselves are similar.

Scottish dancers are generally much better dancers than English.  You watch a good group of Scottish dancers (I don't mean a demonstration team, just good dancers) doing a Strathspey — and it's beautiful.  It's all there — all the finesse, all the style; it's graceful, it's controlled, they're dancing to the music — and they're actually looking at each other, enjoying each other's company in the dance.  Or watch them doing a reel or a jig — it's lively, it's fun, and again they're dancing to the music, acknowledging the other dancers — and all this without a caller.  Now, I hate to admit it, but I think it's the lack of a caller that makes all the difference.  If you want to do Scottish Country Dancing, you go along to classes, and the teacher there will start with step practice: skip-change, slip, pas de basque, Strathspey, and make sure you can do them.  When it comes to the dances, he'll walk it through for the first couple, dance it once through, then that couple goes to the bottom and he walks it and dances it for the next couple.  And so on for the other two couples.  Then you dance it eight times through — and the teacher won't be calling it.  Because in a Scottish class you're expected to remember the dances.  When you eventually get good enough to go to a Saturday Dance, you read up the programme in advance and make sure you do know the dances, because it's unlikely there will be any walkthroughs and even more unlikely that the MC will call the dance as you do it.

With English social dance you almost always have a caller — and that's at the same time a great strength and a great weakness.  A strength, because it means you can have much more variety — you go to dances with four different callers and there won't be much if any overlap of programme.  But a weakness, because people never really learn the dances; they're dancing to the caller, not to the music.  Some callers call all the way through every dance, and I don't think this is good for the dancers at all.

Scottish dancers have to learn the dances, which means they are more aware of what goes on in the set — and therefore more aware of the other dancers.  It also means that you get a lot more dancing done in Scottish.  On the other hand, because the English isn't so intense, I find English dancing much more sociable; in Scottish I hardly have time to thank my partner, return to my seat, thumb rapidly through Piling (the little green book containing diagrams for hundreds of dances), find a new partner and take my place in the set, before the next dance is under way. 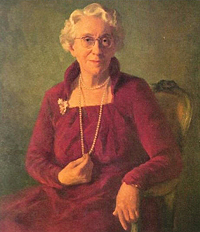 The Cecil Sharp of Scottish dancing was Miss Jean Callander Milligan (1886-1978) and you can read her views in a book called “Won't you join the dance?” which has been adopted as the official manual of The Royal Scottish Country Dance Society.  Some say that Miss Milligan preserved the dancing which was in danger of becoming rough and unseemly; others say she invented a balletic style and prettied everything up so much that a traditional Scottish dancer wouldn't have recognised it.  But equally John Playford wouldn't have recognised much of what we do today — and nor would Cecil Sharp!  It's an evolving process — I'm trying to introduce you to Scottish as it is mainly danced today, and you'll find it taught the same way in England, America, Holland and anywhere else.  Ken McFarland told me that David Rutherford's “Compleat Collection of 200 Country Dances both Old and New, Volume 2”, published in London in 1760, was used very extensively by Jean Milligan as a source for Scottish Country Dances because of the number of Scottish names.  It may have been her only resource when she began reconstructing dances in the 1920's.  The 'Scottish' list from Rutherford is over 20: A Trip to Aberdeen, Hamilton House (which was still being danced in the early 20th century in Scotland), Highland Laddie, Jenny come to Jock, Lennox Love, Lads of Saltcoats, Prince Edward's Delight, Pease Straw (Pease Strae, which was also still being done in Scotland in the early 1920's), Duke of Hamilton's Reel, Woo'd and Married an a', Charlie's Reel (likely Bonnie Prince Charlie), Edinburgh Jigg, Cameronian's Rant, Campbell's Frolic, Grant's Reel, Johnny Groat's House, Just As I was in the Morning, Keppoch's Rant, Maxwell's Rant, The Gates of Edinburgh, The Punch Bowl, etc. etc. etc.  He also pointed out that Jean Milligan frequently matched figures to Scottish tunes as it suited her rather than using the original tunes.

Skip-change step is similar to English but more formal and controlled — a straight leg.  It's all on the balls of the feet — wearing Scottish dancing shoes has a strong effect on the way you dance.  Scottish dancers were horrified when I proposed to dance in my ordinary shoes!  However you will get away with wearing jazz shoes and they probably won't notice.

Setting is more balletic, with a jeté.  In fact the whole of RSCDS style is much influenced by the ballet, and they do not describe it as Folk Dancing — it's country dancing, and they will tell you that it was danced by all classes of Scottish society.  Historical dance experts believe that the RSCDS style is closer to what the English would have done in the 18th century than the EFDSS style.

The Strathspey was probably danced much faster when Scottish dancing was traditional rather than taught by the RSCDS.  Additionally there is now a tendency to dance Strathspeys to slow airs, which are much smoother than Strathspeys (which are staccato).  Some RSCDS members (both dancers and teachers) love this; some hate it.

People assume that Scottish dance music is faster than English because the dancers are moving faster, but I believe it actually needs to be slower for a skip-change than it does for a walk.  The RSCDS suggest: Reel, minim = 112; Jig, dotted crotchet = 112 (same speed); Strathspey, minim = 58-62.  In the 1950's the RSCDS was advocating minim = 84, so they've slowed down a lot!  Of course it depends on many variables; good dancers can do a Strathspey much slower than not-so-good dancers.  Peter Jenkins of Kafoozalum suggests 108-126 for reels and jigs, 54-60 for Strathspeys.

In this workshop I want to do some English and some Scottish dances, so that you can see the similarities rather than the differences.  The vast majority of old Scottish dances are cut-down triple minors (though Scottish dancers don't know that).

The music of a Strathspey resembles that of a traditional English hornpipe — it's in 4:4 time, has lots of dotted notes, and the step could be described as a 1-2-3-hop (I've actually heard a Scottish teacher use the phrase).  In fact if you look more closely at the music you'll that many of the “dotted quaver, semiquaver” rhythms associated with hornpipes are reversed to make a “Scotch Snap” which gives the Strathspey its unique flavour.  If you play “Kafoozalum” with Scotch Snaps it sounds just like a Strathspey!

I now have a page with instructions and hints to callers for 20 or so Scottish Dances, so please take a look.

If you go along to a Scottish Class or Dance, there are some differences which might catch you out.

The Scots find triple minor dances incomprehensible, but they have their own obscurities too, notably the concept of borrowing, which is very useful if you have seven couples.

Borrowing works for any number of three-couple sets and one four-couple set forming one long set, but I've only ever seen it for seven couples so I'll describe that version.  Dancers stay in their own set and don't progress all the way up or down.  On all odd rounds, three couples of each set are dancing and the very bottom couple is neutral.  On the even rounds, the very top couple is neutral, and the bottom set “lends” its top couple to the top set, where they end (as they started) in 3rd place of the dance, and immediately become the 1st couple for the next round in their own set.  That's the bit that catches me out.  There's no “stepping down” to 4th place in the top set, though there is in the bottom set.

If you want to find a Scottish Dance group in your area, look at www.rscds.org.

If you're a caller looking for Scottish dance instructions you could try MiniCrib at www.minicrib.org.uk or the Scottish Country Dance Database at my.strathspey.org/dd/index — and there are many more resources on the web.

Instructions and links to videos of over six thousand Scottish dances old and new can be found at www.scottish-country-dancing-dictionary.com/dance-cribs.html