These notes were first used at Eastbourne International Folk Festival in 2013.

The term “Zesty Playford” was coined by Rhodri Davies for workshops at Chippenham Folk Festival in 2011 following a discussion between Rhodri, caller Mark Elvins and Dance Director Mike Courthold.  One reason he adopted this title was to leave people in no doubt about what to expect — so that it would attract people who like dancing that way, and people who like their Playford done in a more sedate style would be appropriately warned off.  It derives from the title of Larry Jennings' hugely influential book “Zesty Contras”, and it would have baffled dancers of the 17th century.  The word “zest” was in use then, but maybe not the adjective “zesty”, and they didn't call what they were doing “Playford”; it was “country dances”.  Yet even if you'd used the phrase “Lively Country Dances” they would still have been baffled, because of course country dances were lively.  The minuets were the stately dances (though maybe not as stately as some people imagine); the country dances were much more of a romp.  And when Cecil Sharp revived the Playford dances early in the 20th century they were certainly danced at speed.  The dances seem to have been slowing down over the last century or so — we listen to the classic Playford recordings by “Orange and Blue” from the 1970's and think “Wow, that's fast”.  But we used to dance to them happily at that speed!  The problem is that the dancers have got older and we don't have the energy we used to have.  In the 17th and 18th centuries it wasn't a problem — dancing was for the young people.  You've read “Pride and Prejudice” or seen it on TV or film.  Was Mrs Bennet dancing?  Of course she wasn't!  She was there to eat, play cards, socialise with her friends — and take careful note of who was dancing with whom.  The dancing was a way for young people to get to know each other, and get an idea whether the other person would make a good husband or wife.  Can you imagine Elizabeth Bennet coming home from a ball and enthusing to her mother: “Oh, what a wonderful programme.  Lady Bellingham chose such interesting figures, and the musicians played delightfully…”  Mrs Bennet would be yelling “Who did you dance with?”  “How many times?”  “How much is he worth a year?”

But there are younger dancers around, and we're doing them (and our chosen dance form) a great disservice if we persist in walking everything at a stately pace and looking down at these youngsters leaping about as if they were at a ceilidh.  Zesty Playford is sweeping the country — or at least sweeping small areas of the country!  Sessions have been held at IVFDF (the Intervarsity Folk Dance Festival, at Durham, Bristol and Sheffield), Folk Festivals at Chippenham, Eastbourne and Southam, Cecil Sharp House in London, Coventry, Sheffield (Playford in the Pub, run by Daisy Black), St Albans, and probably other places that I don't know about.  There was a great video from the first Coventry Zesty Playford dance on their Facebook page, but the page has now disappeared.  In fact the photo at the top of this page comes from that: Rhodri Davies was calling and you can see his wife Carolyn and daughter Rhianwen dancing together in the foreground; his younger daughter Sioned is on the left with the stripy top.  But with the turnover in students, in 2020 Coventry Zesty Playford is no more.  I'm happy to say that in 2014 Jen Morgan booked me to call one of the Coventry Zesty Playford evenings, and later that year I called a Zesty Playford evening at Chippenham in competition with Hilary Herbert's Playford Ball and a Zesty Playford workshop (which seems an odd concept) at the Southam Gathering.

Here's Rhodri's original manifesto, which he sent me after I'd initially set up this web page: you can see that we have much the same views.

Kathryn and David Wright would qualify “provided you end up in the right place” with “and at the right time”, and I agree with them though that is clearly a challenge for some zesty dancers.

Jen Morgan, organiser of the Coventry Zesty Playford series, likes my parallels between zesty Playford and zesty contra.  She also sees parallels with ceilidh.  One of the things she's going for with CZP is that it should be relatively accessible to non-folkies.  So, as with a ceilidh, the idea is the caller will walk the dances twice and explain any figures that are not obvious, and they dance the dance through enough times to get comfortable with it.  She sees it as not only more lively Playford but more accessible Playford.  She's cautious about associating Playford with Jane Austen and Pride and Prejudice etc., since these days Austen's novels are marketed exclusively at women and she doesn't want to put off the boys!  And she points out that the “rise” as at the end of “up a double” can be a bounce or even a jump.

Of course zesty dancing works best with a zesty band.  Paul Hutchinson formed the Playford Liberation Front as a band to play zesty Playford, and other bands certainly play this music in a zesty manner, but there are some who seem to think that Playford is too “serious” to be treated this way and they adopt a more reverential (which can mean boring) approach.  Of course it depends on the dance and the music — I love some of the slow Playford-style dances and certainly don't want bands to jazz them up.

Paul tells me that PLF came from an informal discussion with Paul James of Blowzabella; they share a love and respect of Playford-style music and recognise that its survival could be jeopardised by the demise of social dance clubs.  Less than a year later Derek Schofield wrote an article in “English Dance and Song” about the future of Folk Dancing with input from me and several others, which is why Paul instigated a discussion at the 2012 Chippenham Festival.  Everyone who attended knew that social dance was in decline, and Paul had hoped for some creative ideas which might reinvigorate it but he felt there were none.

Paul agrees that the way that some bands play doesn't inspire dancers to dance and so it needs a major overhaul.  He suggests that we could start by organising dedicated workshops where the music is not just played but more importantly, discussed.  He says that experienced callers such as Andrew Shaw and me should be present, followed by a public dance in the evening.

“Zesty” doesn't mean everything is done with a skip-change or a rant!  Zesty contras are done with a walk, but it's a purposeful walk and the turns and circles are done with plenty of connection between the dancers.  In the book, Larry Jennings says:

Surely this should apply to Playford-style dances as well as American contras.  So what do I advocate?The important phrase is “where appropriate”.  I wouldn't normally use a slipped circle if it's for two couples and only half-way, because as soon as you've started you're putting the brakes on.  And if you're being zesty I think you need more control, just as driving a car can be more dangerous than walking!  There's a chance that if you dance a move rather than walk it you'll get there too soon, and I'm certainly not advocating that.  Be aware of how far you need to travel and how much music you've got for it.  If you're dancing a hey (reel) or a cross hey, be aware of the half-way point in the music and make sure you're at the half-way point in the figure.

In your drive to be zesty, don't overdo it and upset or intimidate the other people in your set.  If there's someone who quite clearly can't do a slipped circle, don't force them into it despite themselves; a good dancer is considerate of other dancers.

Here are some Playford dances that could certainly be danced in a zesty fashion — and there are many more. 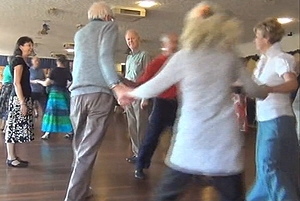 Click on the image to see a video of “Once a Night” from the Apted Book at a Zesty Playford session at my House Party weekend in 2013 with music from Contradition.

On Friday, February 12, 2021, Ann Hinchliffe from Somerset, UK  wrote:
Dear Colin,
Picking up Jen Morgan's suggestion that the rise at the end of 'Up a Double' can be a bounce or even a jump: dancers of the 1600s would certainly agree, since the main step used for country dances then was a coranto. That's skip, skip, skip, jump-with-feet-together (springily so you don't bash your joints!) and it's familiar from Cotswold Morris dances, which share the same ancestry as Playford.
regards,
Ann Hinchliffe