Maggot Pie was the first book of new English Country Dances for maybe 80 years — certainly the first book containing new set dances since John Playford's day — and that was very controversial!  The dances were written by Marjorie Heffer and William Porter from Cambridge.  Marjorie Heffer belonged to the family who ran Heffer's Bookshop there and the book was published by W Heffer and Sons Limited in 1932 — only 8 years after Cecil Sharp's death.  They had previously worked together on the Apted collection, which contained their interpretations of 18th century dances, but this time they branched out into new territory.  They believed that although 18th century collections of English Country Dances would continue to be discovered, these are all “longways for as many as will”.  The earlier “set dances” — often with three figures starting “Up a double”, “Siding” and “Arming” — appeared only in John Playford's books, and since there was no prospect of discovering any more of these they wanted to write some new ones.  This was a revolutionary idea, particularly in Cambridge which stuck firmly to Cecil Sharp's dances and to a large extent still does.  In those days “Folk” was the politically correct term, and when Sharp turned his attention from the traditional dances he had collected in the villages to the Playford dances he had found in the books, he still used this description.  In their defence, Heffer and Porter pointed out in the preface that the Playford dances were not traditional but composed, and they were following this example.  They talk about composing new dances fitted to existing tunes and then says “Of such tunes a great many exist in the old collections, and the majority of our dances are set to them, although in a few instances we have not scrupled to use new tunes”.  The piano edition of the tunes identifies some of the sources:

I believe that the other tunes were composed by William Porter, as stated in the EFDS National Advisory Council minutes.

Douglas Kennedy, Director of the English Folk Dance Society, wrote a Foreword in which he admitted “certain qualms of official conscience”.  But he agreed that many of the old favourites are not Folk Dances either, and said that these dances “deserve the encouragement of every English Dancer, although they cannot be officially sponsored by the E.F.D.S.”

They are all set dances, though a few are actually progressive three couple dances with the same figure three times.  Heffer and Porter deliberately kept to the Playford idiom, and all of the moves can be found in Sharp's Playford interpretations (correct or not).  Jeremy Brown has queried the double star (or star promenade) in “The Doldrum”, and I admit I can't think of any genuine Playford dance which uses this figure.  He suggests that it might have come from some square dance forms, which were published in the journal in the late 1920s.  Sharp and Karpeles published The Country Dance Book part 5 in 1918 which describes the Running Set, and in the introduction Sharp says:

… we may with some assurance claim: — that it is the sole survival of a type of Country-dance which, in order of development, preceded the Playford dance; that it flourished in other parts of England and Scotland a long while after it had fallen into desuetude in the South; and that some time in the eighteenth century it was brought by emigrants from the Border counties to America where it has since been traditionally preserved.

Star promenade does not appear in the book, but perhaps Heffer and Porter thought that if it was a traditional square dance move it could have been danced in Playford's time.

In 2021 George Williams pointed out that there is a star promenade (though for two couples, not four) in “Lady Banbury's Hornpipe”.  You can see Sharp's version, Playford's original and a video of it being danced — the star promenade is at 1:22.  Sharp leaves out the introductory figure but the video (led by Cécile Laye) shows this.  Her timing is also different (and I would say more sensible). 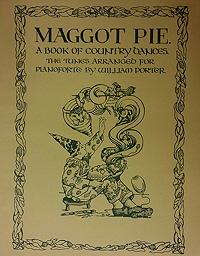 I think they did an amazingly good job.  These days everyone's writing new dances, but they were the pioneers.  I do feel that in some cases they seemed to run out of ideas in the third figure, but in others the invention is consistently good — look at “Queen of Sheba” or “Cupid's Garden” which are superb.  They often have an internal logic, and they fit the music so well.

Maggot Pie is now supposedly published by EFDSS, though when I looked in 2017 they only had the book of tunes, ditto CDSS.  Don't get confused!  The image on the right shows the book of piano arrangements of the tunes.  The image on the left shows the book containing the instructions and the melody lines (no chord symbols), is landscape rather than portrait, and (certainly in its current version) has a plain cover.

Arthur Heffer was just old enough to fight in the first world war, getting to France in 1918 in time to be seriously wounded and invalided home.  Having recovered he went to university at Queen's College, Oxford, and on graduation joined the family firm.  By 1930 he was running the Sidney Street bookshop; his brother Reuben ran the main Petty Cury store, and there was a printing works out on Hills Road.

Arthur was keen on folk dance, and was elected to the EFDS branch committee in 1922.  Reuben was less keen; he joined the committee in 1928 but then married another dancer and they both rather dropped out.  Apart from country dance Arthur was a leading light in Cambridge Morris dance circles. With Rolf Gardiner he founded and led the Travelling Morrice, which had a view of morris dancing at odds with Cecil Sharp's formalised conception.  [Read about the Travelling Morrice at tradcap.com/archive/histtrav.pdf.]

Marjorie Barnett (generally known as Barney) was a few years older than Arthur (she was born in 1892) and trained at the Bedford College of Physical Education where she graduated as Head Student.  I believe she moved to London, and got involved with the English Folk Dance Society as a recognised teacher.

In 1924 she was contracted by the Cambridge branch to teach classes one day a week, and this arrangement continued, with Maud Karpeles (at the EFDS headquarters) pushing Cambridge to have her teach more days to save her travelling, and Cambridge not being sure how much demand there was.  She seems to have oscillated between one and three days a week for the next few years.

In 1929 Marjorie married Arthur (and by then seems to be labelled “Head Branch Teacher”) and in November 1930 they had a son, Douglas.

A Mrs Apted gave them an old book of dances she had found in an old cupboard she had bought, and in 1931 they published “The Apted Book of Country Dances”, which was their interpretation of these old dances.  They were assisted in this by William Porter, who was a Cambridge folkie, more into music than dance.  Of course they had their book printed by the Heffers printers up on Hills Road.  Douglas and Helen Kennedy had recently produced the “Country Dance Book — New Series”, so extending Cecil Sharp's repertoire was not uncharted territory.

Arthur caught pneumonia and died suddenly on 1st November 1931, and in 1932 Marjorie Heffer and William Porter published the “Maggot Pie” book “in memory of Arthur”; the book came out so soon after his death that he probably had a big hand in it anyway.  This was far more controversial in that it was a book of dances they had made up to go to old tunes that had originally been published with inferior dances.

Marjorie Heffer left Cambridge at the end of 1932 to return to London, and without her encouragement these “non-traditional” dances languished.  William Palmer, who started dancing in Cambridge in about 1930 and is famous for Palmer's Pocket Playford, vetoed using “these non-Playford” dances at the Round's annual Playford Ball, though he accepted Apted ones — “that's different” — even if they were not technically Playford.  However by 1980 he had mellowed enough to allow The Doldrum into the programme.

In 1938 Marjorie accepted a job with EFDSS to found a new branch in Cape Town; although she only intended it to be for a few years, the war and Douglas's schooling meant that she stayed in South Africa until 1949 (Pat Shaw wrote the dance Freda's Fancy for Freda Pash who was leaving England as her replacement), when she returned to London before eventually retiring to Dorset where she died in 1974.