Links to dances on other pages

Home places are at the corners of a square, rather than on one side of the square next to your partner.

Some of the tune is 2 beats to the bar; some is three.  A semicolon marks a two-bar phrase; a full stop (period) marks a four- or eight-bar phrase. 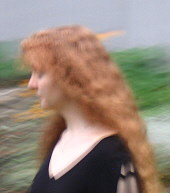 Commissioned by Torbin Zimmerman (on behalf of the Toronto English Country Dance Group) for Christine Robb.  For the preceding three or four years, Christine had kept Toronto's only country dance group alive, doing all the organizing, programming and calling.  Torbin requested a two-couple dance — their group is so small that they do a lot of those.  When I sent the dance he wrote back that I had exceeded his expectations for “rather brisk, complex, and a bit quirky”!  Three years later I called a Dance Weekend in Toronto and was pleased to be able to call this with both him and Christine dancing.  He took the microphone after I had finished calling, to defend himself from my remark “Blame Torbin if you had problems”, and explained that when he had asked for something “somewhat difficult and a little quirky” he had not realised what my baseline for these terms was, which got a good laugh!  The other dance I wrote for Christine is December Rose — I don't know which of the two is harder!

Instructions on another page

This was written as a companion piece for “Mayfair” which appeared in New Dances for Old, Volume 1.  Monopoly players will know that Mayfair and Park Lane are the two most expensive streets on the board, so as soon as I started calling “Mayfair” dancers in England were saying “What about Park Lane?”.  In The States it's “Park Place”, but the original is “Park Lane”, which is the road that runs down the east side of Hyde Park; Mayfair is one of the roads off this and they are indeed very expensive areas.  Although I never published Volume 2, this is again a dance written to a Playford tune recorded by The Orange and Blue for EFDSS — in this case “The Boatman”.

Instructions on another page

Instructions on another page
Close

On Tuesday, September 1, 2009, Bob Brand from Crowborough, East Sussex wrote:
Colin
Ann and I enjoyed Southam and your workshops. We danced Christine's Conundrum with Jo and Brian (you may know I call for the Tunbridge Wells U3A country dance group that Jo and Brian organise). We decided we would have another - and a more leisurely look at the dance to see if we could perform it as a demonstration to the U3A group. Jo and Brian, Ann and I mention Southam to the group from time to time and it would be nice for them to see the complexity of dance we enjoy there.
Thanks again for the great workshops.
Best wishes to the both of you
Bob Brand On Wednesday, September 2, 2009, Colin Hume from Letchworth wrote:
Bob -
Thanks for your message.  I would love to see Christine's Conundrum as a demonstration dance.  There are certainly plenty of different formations in it, and it would benefit from having plenty of room.