The dance scene, past and present

My interest is in Social Dance (or Country Dance) rather than ritual or display dance such as Morris, Clog or Sword.  I've been a caller since around 1976, and a dancer before that: this article is my opinions rather than an official viewpoint. 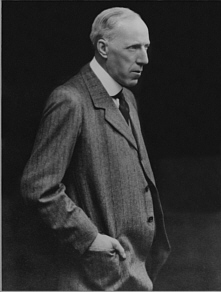 The current interest in Folk Dancing is mainly due to one man: Cecil Sharp (1859-1924) who also collected Folk Songs and Morris Dances.  He lectured about Folk and gave displays all over the country and abroad.  The first book of dances he published was of traditional dances which he had collected in villages where the old dances had not yet died out.  Later he discovered the publications of John Playford, and published four volumes of his interpretations of these dances; he also published a book on American Running Set (arguably the forerunner of square dancing), and books on Folk Songs and Morris.  He founded the English Folk Dance Society in 1911, and in 1932 this merged with the Folk Song Society to become the English Folk Dance and Song Society.  If you want more information about the early days, there's an excellent article by Derek Schofield on the CDSS website.  For more critical assessments of Sharp and his followers, see www.mustrad.org.uk/ articles/oak_acorn.htm or read Georgina Boyes' Book The imagined village.

EFDSS is still the national organisation for Social Dance, though there are three other organisations for Morris Dance.  Throughout the 20th century, Folk Song was the poor relation — some members of the Folk Song Society disagreed with the merger because they thought their activities would be swamped by the dancing, and I think their fears were justified.  An independent report, commissioned by Jim Lloyd when he was Director of EFDSS and later suppressed by him, concluded that the merger between the English Folk Dance Society and the Folk Song Society had never been very successful, and that the cause of many of our problems was that different groups wanted quite different things from the Society.

In fact in the 21st century the status has been reversed.  There are now many more song events run by EFDSS at Cecil Sharp House than there are dance events.

There are also now many Folk activities which have no connection with EFDSS.  There are plenty of Barn Dances put on every Saturday — by schools, clubs and other organisations — where EFDSS is never mentioned.  These are “instant dancing” — the caller assumes that the participants know nothing about Folk Dancing and just want to enjoy themselves for an evening.  Some would say that this is “real” Folk Dancing — dancing of the people, rather than by experts — and that EFDSS has succeeded in giving the dances of this country back to the people of England.  But if you want more than the occasional Barn Dance there are two places to look: the Clubs and the Festivals.

There were about 550 Folk Dance Clubs listed in the Folk Directory which EFDSS used to publish each year.  An enlarged version (called “Root Source”) was available on the web but has now disappeared — EFDSS said they didn't have the resources to maintain it.  Some clubs are affiliated to EFDSS; some are not.  They usually meet once a week or once a fortnight, at a school hall or village hall.  Attendances might vary between 12 and 90.  Often the music is recorded, though some clubs have live music all the time and others have live music some of the time.  Some clubs have the same caller all the time; others have a variety, either chosen from club members or brought in from outside.  Some clubs specialise in one particular type of dance (often Playford-style — these tend to be elderly and mainly female).  Most clubs are welcoming to newcomers, realising that any organisation needs new members to survive, but some look down on beginners.  Some run evenings of dance technique occasionally, but most don't.  You go to a Club to learn dances (or more accurately to do dances); you don't often learn how to dance!

Clubs usually meet on a week-day evening, for 2 or 2½ hours including a tea break.  In addition, many of them run Saturday Dances two or three times a year.  These are much more likely to have a Band and a “name” caller, and will attract plenty of dancers other than club members; a Saturday Dance will probably have between 60 and 120 people.

Some Clubs say that they are self-sufficient and don't need EFDSS, but EFDSS provides (or should provide) the links between people and Clubs.  The Folk Directory used to list Clubs, when and where they meet, what sort of dances they do, and give a telephone number to contact.  EFDSS produces a regular magazine, “English Dance & Song”, which lists the Saturday Dances around the country.  And Cecil Sharp House, the London Headquarters of EFDSS, should be a good place to contact if you want to know what's going on in the Folk world, though for dance events you'd probably have done better on the “Set and turn Single” website which ws independently run.  Unfortunately this is no longer active — I offered to take it over but was turned down.  EFDSS are creating a replacement at www.efdss.org/calendar-events.  You have to create an account to add your own events, but that's free.

Cecil Sharp House also provides a varied programme of Dance, Song and Music events.  I used to help run the “Beginners” session there every Thursday, at which we usually had 70 or 80 people — some complete beginners, some experienced dancers who simply enjoyed the atmosphere, some who had been coming for years and still don't know their right foot from their left ear!  There is a dance some Saturday evenings, but the numbers are not what they were; I think we must accept the fact that Folk (both Dance and Song) is not the popular activity in England that it was 30 years ago.  Indeed the participants tend to be the same people who came 30 years ago!

Then there are the Folk Festivals.  These are day, week-end or week events, usually in the summer, with a range of bands, callers and teachers.  Some such as Sidmouth are world-famous; others are smaller and not well-known.  Some are mainly aimed at singers and morris dancers; I can read through the list of bands and callers without finding anyone that I would want to dance to.  Some are almost exclusively for experienced dancers — particularly Eastbourne (now moved to Evesham), Southam and Lichfield.  Sidmouth used to be so big that it catered for everyone, though events could be very crowded.  However, after expanding for 50 years its future was uncertain after North Devon Council announced in 2004 that they could no longer provide a guarantee in case the festival made a loss because of bad weather.  A smaller (fragmented) version of the festival ran in 2005 and more integrated versions the following years — it seems to be back together again now.  My favourite Folk Festival is Chippenham (3 days over the second May Bank Holiday weekend) which has a full dancers' programme but also plenty of other events if you want a break from that.

Many festivals cater for campers, in tents, caravans or motor-homes, but there is always accommodation available as well.  A festival in a holiday resort such as Whitby means you can find bed-and-breakfast accommodation at some of the many small hotels in the town, though you may struggle at Sidmouth.

Halsway Manor in Somerset (south-west England) is a residential Folk Centre, where you can finds weeks and week-ends of Folk Dancing throughout the year.  Some of these are organised by Folk Associations (what used to be EFDSS Districts) or by Clubs; others are run by the Manor.

Another organisation is Folk Camps, which runs weeks and week-ends of Folk Dancing and Singing (and Crafts), mainly in the summer.  These are often family events.  The staff of Leader, Warden, Musician and Caterer are there to supervise, but everyone helps with the cooking and cleaning, and lots of people play in the band, call dances or help run workshops.  Usually there are music and morris workshops after breakfast and then most people go out for the day — though the people who stay behind may organise something.  After the evening meal there are singing games for the smaller children, then simple dances for the not so small, a break for tea/coffee/cocoa with some Folk Songs, and then the dancing continues until fairly late.  People are amazingly friendly, and by the end of the week you feel that you have known them all your life.  Read my essay for more information.  There are also specialised Folk Camps — one weekend for dancers, one for singers and one for musicians.

EFDSS went through a crisis in 1986 when the people then in charge tried to sell Cecil Sharp House and many members rebelled against them.  There were bitter arguments, and people on both sides left the Society.  They have had a number of Directors and Chief Executives since then, and a lot of money has been spent — not always wisely.  Working Parties have examined the role and organisation of EFDSS, particularly as it is not the only organisation for Folk events, but the Society still suffers from a severe lack of credibility and was in financial trouble again around 2004, though things seem to be running more smoothly now.  In 2006 people started working on a major refurbishment of the House and Library — or rather working on the grant application, which is a major job on its own.  The current (2008) situation seems much healthier, and the Annual Report and Accounts made most encouraging reading.

On Saturday, May 1, 2010, John Turner from Southampton wrote:
Colin
Jusr read your page on the dance scene.
Excellent article.