I announced “Morpeth Rant” at a dance in Kendal in the Lake District — and the floor cleared!  I was horrified.  I know it's the North-West rather than the North-East — but England isn't very wide up there!  I'd heard they did a lot of rant dances in the North of England, but maybe that's just one of those tales they tell the tourists.

Some people have a fixed idea that it has to be very energetic, and if you're doing North-West Morris it certainly is; they bash down on the front foot to make a lot of noise.  But the normal rant step really isn't that violent; I can do a rant step while talking to a class of dancers.  It's probably not a step you pick up the first few times you try it, but persevere: it can be done.  Start by doing “Hop, hop, change (pause), hop, hop, change (pause)”.  I would suggest two hops on the left foot, one on the right foot and hold it there, then do the same starting on the right foot.  Paul Ross from New York saw this video and noted that some of those beginners who flexed the “free” leg behind them during the hop-hop-change practice at the beginning had a bit more difficulty transitioning to the tap-hop-change sequence, so try and avoid that — keep the free foot down.  Make sure you can do this move before moving on to stage two.  When it seems to be coming naturally, between the two hops on the same foot you just tap the ground gently with your spare foot.  So the rhythm becomes “Hop-tap, hop, change (pause), hop-tap, hop, change (pause)”, and that gives the familiar rhythm of “potato crisps” (or in The States, “potato chips”).  Notice that when stepping on the spot you're not putting your weight on the front foot — it just happens to touch the ground.  (Madeleine Smith disagrees with this — she's been taught that the weight should be evenly balanced at this point.)  Some people make a big thing of crossing the front foot over, but really that's not important.  Mike Barraclough says:

Originally it was never done with crossed feet.  However, after London Folk danced a rant with crossed feet (for theatrical reasons, emulating the NW Morris polka) at the Royal Albert Hall Folk Festival everyone assumed that was 'correct' and started to do that.

You're bound to lose the step occasionally while you're learning it, but just drop back to the “hop, hop, change” until you've got the rhythm back and then try it again.  Some people advocate practicing this while standing at the bus stop! 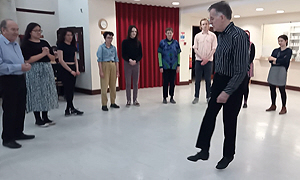 The first hop is on the up-beat before the bar-line, so the timing is:

though this gives the impression that there are four equal sections and that's not what I meant: the first hop is later.  One rant step (one “potato crisp”) takes one bar (two beats) so maybe it's clearer splitting a bar into 8 little bits (or even clearer to click the image above and see me teaching it):

The rant is not a step for covering large distances — for that you want a polka.  The rant is a contained step, with the weight over the feet.  There are several longways dances where the ones lead down the middle with a walk step and come back with a rant step while the twos move in above them.  It shouldn't be necessary for the twos to force the ones off — if they're doing a proper rant step they won't come back as far as they walked down anyway.

For a travelling rant step you do put your weight on the front foot rather than just tapping it, and I certainly don't recommend crossing the front foot over!  I've seen people do it at ceilidhs — dancing a reel of four and no doubt thinking they were very clever — but it looked ludicrous to me.  Madeleine Smith says she always teaches the travelling rant step before the stationary one, possibly to get round this oddity. 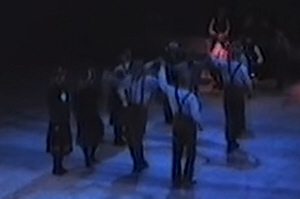 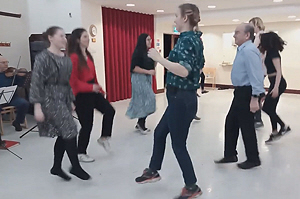 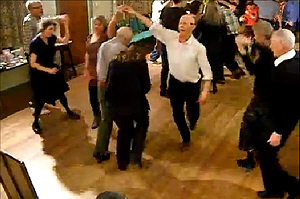 As soon as many people take hold of their partner to dance around another couple they switch to a polka.  Now it seems to me that if it's a rant dance you should rant around the other couple rather than polka.  It means you have to get in closer to them, since a rant isn't a distance-covering step, but it certainly can be done — you can see it expertly done by the Reading Cloggies by clicking the first image above.  And see the notes on Feet for the business of changing foot before the dance around.  I also talk about the rant step in Training Session 6 — More steps and give four examples of dances, starting with “Double Lead Through” which is the one I use after teaching the step.  Click the second image to see the dancers at The Round performing this dance after my teaching session — some with more success than others, but for most of them it was their first experience of a Rant Step.  To see more expienced dancers, click the third image, where Burt Hunter (in the white shirt nearest the camera) is calling “La Russe” — any yes they do cross their feet in the travelling rant and they don't fall over!  I asked Burt whether he did a rant or a polka when he danced round the other couple, and how much weight he puts on the tapping foot generally.  He replied,

I aspire to ranting for the 'swing and change' but it depends on (a) the level of ability of my partner and (b) my energy level.

As for the amount of weight I put on the tap I would say that it varies.  It is generally a lightish tap but if I am with a number of fellow ranters and the floor is fairly resonant we might accentuate the tapping for 'artistic' effect.

On Tuesday, March 10, 2009, Anthony Robb from County Durham wrote:
I lived in the Alnwick area of Northumberland for 27 years from 1976. When I first arrived the Rant was the step of choice even for Gay Gordons, Dashing White Sargeant, Eightsome Reel etc.
Louis Killen remembers Teddy boys in drapes & winkle pickers Ranting at the Alnwick Gathering dance back in the  1950's. Sadly there are only pockets of such expertise now up there and callers announcing Morpeth Rant have to be prepared to give it half an hour and put up with a let's get on with it attitude from the less dedicated dancers!
Please keep up the good work with your attempts and spread the word as much as possible.
Anthony Robb On Friday, December 4, 2009, Liz Balfour from Edinburgh wrote:
How fast should a Rant be played and danced?