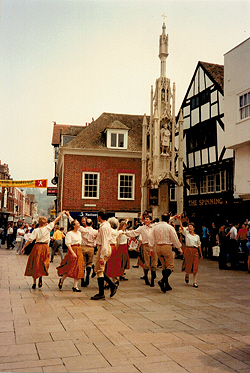 In addition to hundreds of Folk Dance Clubs around Britain, there are a number of Display Teams (known as Performance Groups in the USA and Demo Teams in RSCDS).  I'm not talking here about Morris, Rapper, Longsword or Molly sides — these are specifically display dances and are covered elsewhere.  I mean teams which display English Country Dancing (often with the addition of other dance forms) to an audience.

Our dancing isn't designed with display in mind — it's done for the enjoyment of the participants rather than to entertain or impress an audience — so the dances are often “souped-up” a little, and several can be glued together into a sequence or suite of dances, often varying the formation and rhythm from dance to dance.  In my view this is fine so long as the original dances are still discernible.  If a dancer in the audience can say “It's an eight-couple version of Cumberland Square Eight” or “It's a six-couple version of Dorset Four-hand Reel” I'd be much happier than if they said “It's an impressive piece of choreography but I don't recognise any of it”!  If you're in a Display Team and looking for ideas, I'm sure you can work out how to do the double Cumberland Square Eight — two couples on each side, the heads working with their opposite head couple for the stars and baskets, sides the same.  For other suggestions of adapting traditional dances for display, have a look at Dorset Twelve-Hand Reel and Nottingham Swing Sicilian.

Often however there are no dancers in the audience: the team may perform at a village fête or a twinning association event where the audience knows nothing of Folk Dancing.  In this case a sequence of three complicated Playford dances may be totally wasted on them — most people won't even realise that there are three different dances — whereas a simple energetic traditional dance may go down really well.  Teams are often quite nervous at the thought of appearing at a Folk Festival, where experienced dancers may be judging their performance and noticing all the little mistakes. 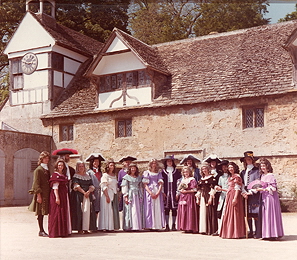 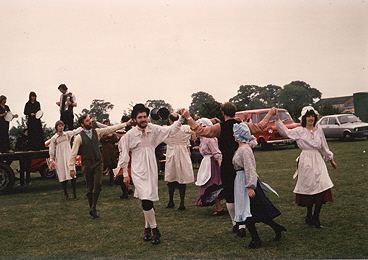 Here's my old team, the Jovial Beggars, based in Harlow and run by Walt Tingle.  We had a really good arrangement.  You can see the gentry on the left (led by Walt) who would do a high-class Playford sequence, and then the Rustics on the right (led by me) would burst on and do something wild and energetic.  The audience loved the variety, and it meant that each group had a chance to rest and decide what to perform next while the other group was on.  We even had different music — a recorder consort for the Gentry and an accordionist for the Rustics.  The two groups would get together and the end of the display to do our name dance — “The Jovial Beggars” from the Maggot Pie collection — but in two very different styles!  There was plenty of repartee between the two groups, and between the dancers and the audience, and I think that's really important, A lot of teams would just walk on, perform a sequence of dances, and walk off again.  We were very much aware that we were entertainers — our unspoken motto was “We may not be perfect, but by God we're jovial”!  We were also a democratic team — everyone could have their say about a particular sequence, and eventually Walt would say, “All right, I've listened to the arguments: here's what we're going to do”.  I remember once at Broadstairs Folk Week we were booked to do displays and so were Contra from the Birmingham area.  There were two sequences that we were performing together, one choreographed by us and one by them.  A soon as their choreographer explained the sequence, some of the JBs started saying, “Why don't we do so-and-so?” while the members of Contra looked on in shocked silence — you didn't argue with the person in charge!

Some would argue that if you want to dance well, with other people who are committed to dancing well, the best thing to do is join a Display Team.  I'd say this isn't necessarily true, but it's certainly worth a try!