Written (when I was a bachelor) as a second tune for Pat Shaw's dance “The American Husband”.  Warn the caller if you're going to use it — the A-music starts like the B-music of the original tune!

Mark was calling the wedding dance for Philip Rowe and Joyce Bradley.  He wrote a contra and asked me to write a tune.

The dance instructions are on the cambridgefolk.org.uk/ website, and both dance and music appear in Mark's book “Both Feet Plus One” published in 2010.

During the coronavirus pandemic I was asked to host an online discussion with Bernie Culkin and Louise Siddons, both of whom (against the odds) had started successful dance groups in the past few years.  The event was advertised as “The Phoenix: Must English social dance die to rise again?” and Bernie said we needed five minutes of music at the start while people joined the session, so I wrote these variations on the Playford dance tune “The Phoenix”.  Make sure you click “Play MP3” to get the full effect — and you'll need to wait patiently while the ABC is converted to Wav format and thence to MP3.

For Hannah Dixon, excellent fiddle player at Cambridge (UK) Contra.  Hannah moved to Peterborough and for a few years I didn't see much of her.  I was so glad when she moved back to the Cambridge area that I presented her with this tune.

I was calling an American session at Whitby Folk Week in 2010 with Jigabit led by Fiona Maurice-Smith whom I hadn't seen for many years — she's on the wedding circuit rather than the dance club circuit these days!  I wanted a 48-bar reel for one of my squares and these seem to be in short supply, so Fi wrote me this one and it's here in case other bands are asked for a 48-bar American-style reel suitable for a patter square.  I wanted to call it “Fi's 48” but she chose another title.

The dance is by Ann Higley (now Ann Barlow) and the instructions are in her book “Dancing Every Day” published in 1997.  I was taken by the dance and decided to write a tune to it. 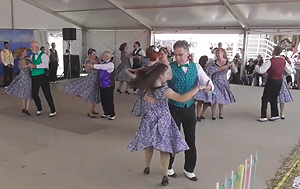 Keith Wood is an Australian dance composer and computer programmer, and he has some very effective animations of dances (including this one) on the Dance Kaleidoscope website.  He wrote the dance for Isobel Blake's 70th birthday in 2016 and called it at her party that same day.  I came across this dance and liked the look of it; Keith doesn't write music so I wrote this tune which was well received by Isobel and the group.

The dance is available in Keith's book Wooden Leg Volume 3.

Keith is also a member of the Australian Colonial and Folk Dancers — click on the image to see an excellent display by them in 2016 including a wonderful “build-up” version of Levi Jackson Rag.

I was contacted by Anne Robertson who lives in Kinross, 25 miles north of Edinburgh.  She was looking for someone to write a Scottish reel for a friend who loves Scottish dance music: Jimmy Shand, Ian Powrie, Ernie Cowie etc., and was having a special birthday in May 2017.  She found me by searching the web and said I was third time lucky.  I wrote a reel but didn't think much of it the next day, so I wrote a march.  I said if she didn't like it I would try again, though it would help greatly if she could try to say what she don't like about it!  Anne said:

I am delighted with the march, Colin, it has a lovely swing to it. You can just imagine walking along in time to it. Conclusion: I can`t find anything I don`t like about it.  I am so glad I came across your name when looking for a composer.

The two tunes “Joy” and “There's one on the way” were written by Dennis Salter in 1991 for his first grandchild and 1993 when her brother Julian was expected.  I've liked these tunes for years, and they go well to Lannie McQuaide's contra “Joy”.

Maggie Grant of New Jersey asked me to write a waltz for her, and I was very pleased with this one (though I struggle to play it).  As written it's a 96-bar waltz, so if you're playing it at the end of a dance and don't want it to go on too long (in England, I'm talking about!) you could play it AABBCC and then ABC.

Another dance by Keith Wood — see Isobel's Idyll above.  This time he actually asked me to write a tune for the dance, which you can see animated on the Dance Kaleidoscope site.

The dance was written by Cor Hogendijk for Pat Shaw, who had close links with The Netherlands, and published in “English or Double Dutch” in 1973.  There's not much live music for dancing in The Netherlands, and for this reason (I assume) dances are often written to existing recorded tunes.  Cor set this one to the Scottish jig “My wife's a wanton wee thing”.  Mick Peat and the Ripley Wayfarers used a different tune, and Mick told the dancers that the last phrase of music said “Move up, move up, move up”.  “No it doesn't”, I thought, so I wrote one that did!  I also felt that a dance this good deserved its own tune.  Later when Wild Thyme were recording the “Dutch Crossing” CD they used my tune for the reprise of “Pat's Tradition”.  This came in for some criticism from people in Belgium and Holland who felt that it was not right to use a different tune, and by that time Cor was dead so I couldn't ask him.  The same criticism was applied to my tune for Ernst van Brakel's dance “Dutch Crossing” (for which he had used a recording of the Scottish reel “Merry Lads of Ayr”), though in this case I had asked Ernst and he had said it was fine.  He told me that people who were used to the old tune preferred that, whereas people new to the dance preferred mine.