Wild Thyme were a top band for many years, and their legacy lives on not just in the people but in their recordings.  It was Elvyn Blomfield's idea.  In 1976 she said to her husband John “We should form a band.  It's got to be a good band, and we'll call it Wild Thyme.” They already knew Dave Brown, so they asked him if he knew a good bass player, and he suggested Bob Barrett, so those four were the original line-up — with Elvyn on guitar.  I first met all the members of Wild Thyme at one Folk Camp or another before they were involved with the band.  As a very new caller I went to a camp where John was the leader and Dave was the musician, and spent most of the week copying John's dance cards — I still think the reason I don't have many Sicilian Circles in my repertoire is that I didn't have time to get to that section!

By the time Wild Thyme became well-known the line-up was John Blomfield on melodeon and percussion, Elvyn Blomfield on keyboard, Dave Brown on fiddle and Tina Brown on bass guitar.  The first time I heard them was at the Berkshire Folk Festival in 1980, when they were doing a Fallibroome Workshop led by Brian Jones.

They really liked the Fallibroome tunes, and less than three years later they produced their first recording: “Wild Thyme plays Fallibroome”, which was immediately seized upon by dance clubs up and down the country.

The sleeve notes by Brian Jones describe Wild Thyme as “just one of the many excellent bands playing for folk dancing”, which I think does them an injustice.  At the farewell dance in 1999 Hilary Herbert said that a few years earlier she had said to Neil “Do you think I'll ever get a chance to call with Wild Thyme or someone like them?” but she then realised that there was no other band like Wild Thyme!

Two years later, in 1985, they recorded their second selection of Fallibroome tunes — “The Beau's Retreat”.  By this time I was getting better known as a caller, and I called with them many times.  They always provided the music I wanted — usually I didn't even have to set the speed.  I remember being on staff at Callers courses with members of Wild Thyme playing and me thinking “This is no test of the caller's ability to control a band — they don't need any controlling”.  To me they exemplified a band who could play Playford-style music with guts — not the ethereal style that is popular in the States (beautiful though that is) but music with vitality and strength — and of course that comes across even more with traditional tunes — rants, polkas and so on.

By this time John's daughter Julia was old enough to play fiddle, and for a time she would stand in for Dave when he couldn't make it.  Then one day John made a mistake with the booking and both Dave and Julia turned up — and from then on Wild Thyme had their trademark “two fiddles” sound.  The first recording Julia made with them was “Hunter's Moon” in 1987: still their most popular album.  This had dances selected (and mainly interpreted) by Tom Cook, who certainly knew a good tune when he met one.  It contained classics such as “Delia”, “Wakefield Hunt”, “Volpony”, “The Merry Salopians” (which in The States is always called by the name of the tune, “The Old Mill”) and “Unrequited Love” which rapidly became my most popular dance — I'm told that at one club callers' night three people turned up with the record wanting to call it.

The next year, 1988, they recorded my “Dances with a Difference Volume 2” and I spent an exhausting week in the studio with them.  There were moments of great hilarity, and we had only one argument — a tribute to their professionalism and recording experience.

That same year they recorded “Packington's Pound”, the follow-up to “Hunter's Moon”, for Tom Cook.

They recorded several cassettes for Ken Sheffield's “From Two Barns” series of books.  Ken was not as quick at getting the books printed as the band were at getting the music recorded, and I remember I was calling with them when Ken came up to them with the book they had been waiting for.  As I recall, they (literally) rolled out a red carpet, sat him down and presented him with a glass of wine — while I looked on, totally bemused until they explained.

Later Julia married Shane Day, and he and his accordion joined the band.  Shane and Julia both tended to play rather quietly, and it was only when I heard the two of them accompanying Melanie Barber clog dancing that I realised what good musicians they were! 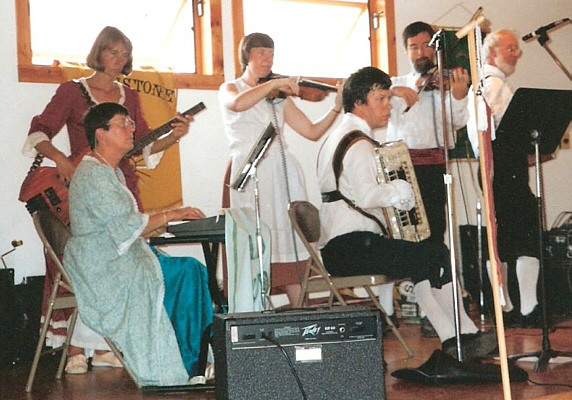 In 1993 Wild Thyme moved up to CD format with the “Dutch Crossing” collection for the Dutch Folk Dance Society NVS.

Dave and Tina had split up by this time, and eventually Dave decided to leave the band.  I remember hearing them at Eastbourne International Folk Festival soon after that, and wondering whether the Wild Thyme sound would still be there.  They led off with “Wakefield Hunt”, and I thought “Yes, it is!” — it was quite an emotional experience for me.

On November 27th 1999, Wild Thyme had their Farewell Dance at The Grange Hall, Southam, Warwickshire.  I was privileged to MC the event; the other callers were Hilary Herbert, Barbara Kinsman and Andrew Shaw.  The tickets had been sold out for months, with a long waiting list.  Both Bob and Dave were there, and the band played wonderfully well.  They had chosen all the tunes, which meant in most cases they had automatically chosen the dances — but I wasn't going to let them get away scot-free.  I wrote a dance “Closing Thyme” to the tune “Wakefield Hunt” and tried it out there for the first time.  It was a total disaster — none of the sets got through it.  Apart from that the whole event went very well.

Wild Thyme were one of my favourite bands for years, and life was certainly not the same without them, but John and Elvyn felt they had had enough and moved to a remote Scottish island just to make sure they didn't change their minds.  Elvyn stayed there after John's death in 2004, with occasional trips to the Southam Festival to play with Julia, Shane and Tina, and for several years she has run a do-it-yourself Folk Dance Week on the Isle of Mull which attracts an enthusiastic following. 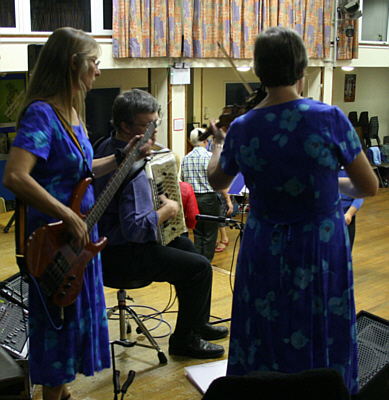 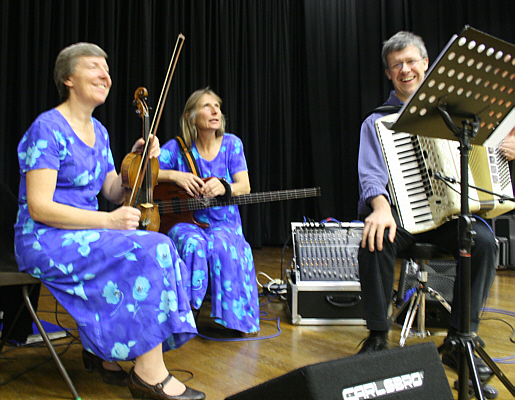 Julia, Shane and Tina decided to continue Wild Thyme as the next generation — Keeping Thyme — and are still playing most weekends.  They changed the name because they felt that the founders were all gone and the sound would inevitably be different, but they are the same people doing the same things.  Julia points out that they do still feel strongly connected to Wild Thyme, and they still hear John playing with them on stage in their heads when they do the old Wild Thyme arrangements!

Julia, Shane and Dave played as Contradition for many years, but Dave moved to France in 2015 so they probably won't work together again. 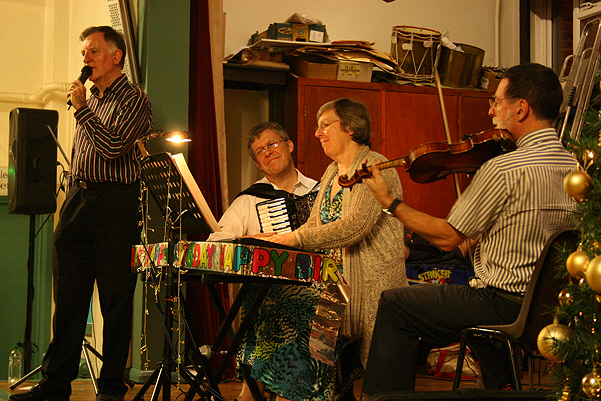 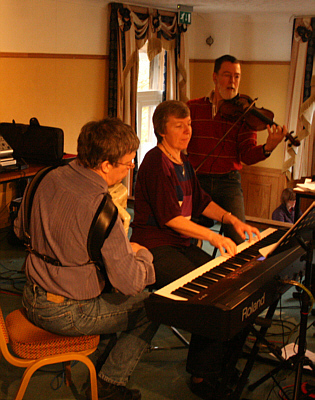 On Thursday, July 28, 2016, Des Thompson from Gaydon, Warks CV35 0HF wrote:
Fascinating and useful. Thank you for your comittment and enthusiasm.