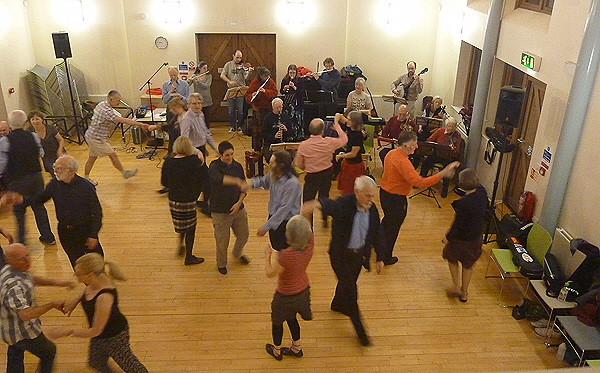 On 22nd January 2016, Cambridge Contra celebrated its 20th birthday, with lots of musicians, dancers and food including two cakes with appropriate wording.  As far as I know this is the oldest Contra Dance group in England, so I thought it was time to explore the phenomenon.

First off, what is Contra?  It's an American dance form which evolved from the English longways dances that the settlers took over to America with them.  You line up in one or more longways sets, opposite (“contra”) your partner.  These days you usually take hands four from the top to form groups of two couples and then the couple nearer the top change places so that your neighbour is of the opposite sex.  After one turn of the dance you have progressed past this couple and you do the same dance with the next couple, and so on.  The style is walked but energetic, with lots of swinging, and in the States many people put in extra twirls and flourishes, some derived from swing dancing, though not much of that happens at Cambridge.  The dances don't normally have their own tunes; the caller asks for jigs or reels and the band provides these. 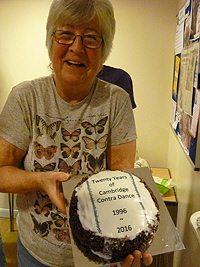 Jay with one of the cakes
So how did it start in Cambridge?  Thomas Green was a researcher at the Medical Research Council's Applied Psychology Unit in Cambridge who came back from a trip to America full of the dancing there and said to Hugh Stewart, “Why is there no contra dancing in England?” Hugh is a leading light with The Round, the University Folk Dance Group, and dances at Folk Festivals across the country, so he was a good person to ask.  He said, “You need live music”.  Thomas played flute and whistle, and they both danced with the Harston and Haslingfield Folk Dance Club -two villages on the outskirts of Cambridge which used to have separate clubs but have now combined.  At the club Thomas said to Jay Cole, “You dance in time to the music.  Do you play an instrument?” Jay admitted that she used to play piano, whereupon Thomas told her to come along to the practice that Sunday — and Cambridge Contra was born.  Jay has been the only constant player, though the group has had over fifty musicians during the twenty years.  Thomas led the band initially, and produced a book with sets of tunes in time for the first rehearsal.  For the first year or so, Thomas, Jay, Mike Gilbert (clarinet and accordion) and Heather Payne (fiddle) held the music together.  After five years Thomas moved to Leeds (and started the contra group there) so Jay took over, though she emphasises that no-one actually “runs” the band.  In the early days some musicians drifted in late, so Hugh would always have his CDs available and Jay used to dance quite a lot.  The group has never had to resort to CDs for the whole evening, though I remember one occasion when the band was Jay and I on two pianos — and neither of us was expecting to play melody!  Jay encourages the other musicians to dance as well, knowing that this makes a better dance musician.  After ten years some people felt the need for some new tunes, and a second book was produced. — we use them both today.  But there are still some tunes that the band has never played — Jay mentioned “Wizard's Walk” and “Levi Jackson Rag”.

I started dancing (and calling) at Cambridge Contra in 2005 and was immediately impressed.  Live music, a range of dancers from student to retired, changing partner every dance, and all the callers are good!  (Could you say that about your club?) There are now several other Contra groups around the country; my favourite is the Alcester Contra series in the Midlands run by the wonderful Meg Winters.  But there's an interesting difference.  Meg books well-known bands and callers, and pays them — hers is more like a Contra Dance in the States.  Hugh wanted Cambridge Contra to be more like a dance club, so the musicians and callers come from within the group and no-one is paid.  He also wanted to bring in more non-dance people, though that hasn't really worked.  Depending on the number of callers available, Hugh may call the whole of the first half or he may ask someone else to share it; the second half often has three or four other callers.  Hugh was originally worried that he might end up calling the whole evening, but Harston and Haslingfield is a club which encourages and promotes new callers so that wasn't a problem.  Two of us also call squares, which always go down well.  Sometimes the contras don't work, but there's a good atmosphere and people are willing to walk the dance through two or three times while the caller sorts out what he really meant!  The club has also had occasional special evenings with callers from the States including Eric Hofmann, Kathy Anderson and Wendy Graham. 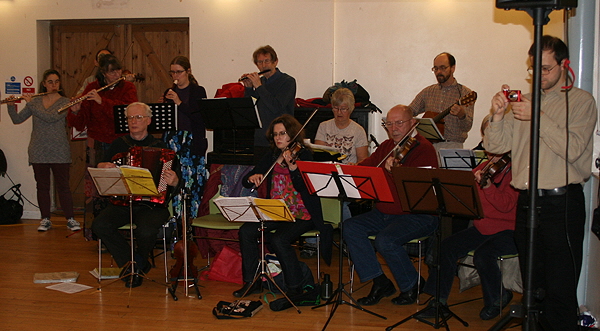 The Band — not always as large as this!

The dance has had three venues over the years.  The first (found by Emma Rushton, an enthusiastic contra dancing student who then married an American and moved to the States) was in Richmond Road.  It was fine until the church got a new cleaner who was very keen on polishing the floor but used an inferior wax polish so that we left a pile of scuff every time we danced there.  They threw us out.  The next venue was a decaying church hall in Hartington Grove, entered through a narrow unlit passage down the side of the church.  The piano had a big sign saying “Do not move this piano” — not because it was valuable but because it was concealing a hole in the floor!  Then the lights stopped working at that end of the hall, so we had to move the band (and the piano, if I was playing) to the far end.  By then the church congregation was down to about six people, and they decided to sell the hall (despite our existing bookings), giving Hugh a month to find a new venue.  And he found a really nice church hall in St Andrew's Road, with an in-tune piano and no holes in the floor.  The new venue has encouraged new people, and numbers are now better than ever.

That's not to say that we never have problems.  Jay was away for the session before the 20th Birthday event so Hugh asked me to play piano — Jay always brings her own keyboard.  I arrived and found the piano locked.  Everybody joined in the search for the key.  Hugh phoned the man who looks after the hall and he looked around but couldn't find it.  Fortunately Quentin plays both guitar and banjo, so he stuck with banjo and I ended up leading the band on guitar which I was not expecting to do!  There is now a spare key and Hugh knows where it's kept. 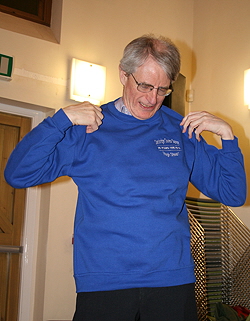 Hugh tries on the sweatshirt
For the 20th birthday dance we had a total of sixteen musicians during the evening, and they sounded fantastic.  Enough dancers for two full longways sets, which is rare, and people had been asked to bring food so that we could have a longer evening than usual with a good long interval for people to socialise.  Thomas Green was planning to come down from York , but he had been flooded out of his house so he couldn't make it.

The man who has really held everything together for the past twenty years is Hugh Stewart, who provides the amplification, provides the CDs if necessary, schedules the callers. books the hall and keeps the website up-to-date.  He was presented with a souvenir sweatshirt amid much applause.