Why am I a Caller? 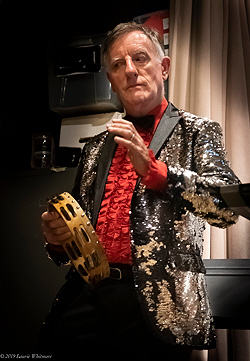 I was calling the final dance at Chippenham Festival in May 1996, and made some remark about the ego-trip of being up there on stage, which was why everyone became a caller.  Hilary Herbert seemed to look very disapproving at this — and I was joking really — but it did make me ask myself why I am a caller.  The basic reason is the same as why I'm a dancer: I enjoy it.  But what aspects of it in particular?  Of course I like the applause, and people telling me how much they enjoyed the evening — and you would hear the same from singers, musicians, actors, comedians and any other performers.  The difference is that these other entertainers have a seated audience and it's much more of a one-way process.  For a caller, the dancers are participants and it's very much a two-way process.  They haven't come to enjoy what the caller is doing; they've come to enjoy dancing, and the caller is the facilitator of this, just as a train or coach driver facilitates you going to the seaside.  But a caller can also be entertaining — I happen to believe that he or she should — so you get a whole range of opinion ranging from those who think that a good caller should call dances with a minimum of fuss and personality, to those who think that a caller is first and foremost an entertainer, and the way he calls and the dances he chooses are secondary.  This is why there are such diverse opinions on who is or is not a “good” caller; different people are looking for different things.  I've been told that my personality gets in the way of the dances and I should let them stand on their own.  On the other hand, I've also been told (in America, admittedly) that I'm a great stand-up comic, and don't need to call at all!

So is it really an ego-trip?  Not altogether.  I think if I was on an ego-trip I'd be calling solidly all the way through every dance — to prove to the crowd that I was in charge and they really needed me.  That's not my style; in a repetitive dance I want to fade the calling out so that people can dance to the music.  I find that if I repeat a dance and say “We'll do it without the call this time” there's a barrage of protest, but when I persist the dancers discover that they actually can do the dance without the call.  Afterwards there's a lot more applause, because the dancers feel they have achieved something; they're applauding the dance (or themselves) rather than the caller.

I decided I ought to get some more opinions on the matter, so I asked Wendy Crouch, who had a very different calling style from mine.  Wendy started calling because she was asked to lead a new dance club, was pleased to have been asked, and was confident enough to give it a try.  This led on to calling at other clubs which had visiting callers, to attending a Dance Instructors' Course in 1980 (which must have been where I first met her) because of a desire to learn to call better, and to running a social dance display group.

Wendy taught children to dance in schools, and always considered herself a “teacher” rather than a “caller” (now there's a distinction I could discuss at length); she enjoyed explaining complicated dances and moves, and “finesse”.  Although she wanted people to enjoy their dancing she was easily bored with repetitive and simple dances, so she rarely called barn dances, much preferring “serious” clubs, workshops and dancers' events.

When she started calling she was not impressed by some of the club callers she saw and heard, and thought she could do better.  She had a good memory for learning and remembering dances, so she could often see why the caller was having problems.  She also wanted to do dances which others did not call, particularly more of the Playford-style dances, and her philosophy was “If you want something done and no-one else will, do it yourself”!  I'm sure this is why she started the “Grand Union of Folk Dancers” Festival at Southam which was such a success from the start, and why she was in charge of the EFDSS Training Programme for a while.

Then of course I had to contact Hilary Herbert — who couldn't remember looking disapproving at my remarks and denied everything.  Hilary is another caller who was known in a small area and then “discovered” by Chippenham Festival.  Hilary was living in Cardiff at that time, and writes dances which are almost as impossible as mine; Wendy also wrote quite difficult dances, so maybe I'm not taking a random sample of callers at all!  In fact Hilary's dance “Waverley Ahoy!” which appeared after this article was published in English Dance & Song is the hardest dance I've ever called or danced.

Hilary's first reason for being a caller is the same as mine — it's fun and she enjoys it.  People asked her to do it, and having tried it she decided she was reasonably good at it.  She also feels that it is a way of sharing her own enthusiasm and experience, and sharing dances that are interesting and enjoyable.  She likes seeing a dance come to life and the patterns emerge, and can arrange the programme to her liking (within reason).  It also adds another dimension to her dancing.  Finally she agreed that it can sometimes be an ego-trip — it's certainly good for the ego when things go well — but that's a bit risky as the dancers can soon cut you down to size.  I'd definitely go along with that; people would probably be surprised how much I worry about criticism.  If twenty people tell me it was a great evening and one person says he didn't like it, guess which one I go home thinking about!

I came back to this page over 20 years later, looking for somewhere to put that photo at the top!  I had bought the sequined jacket in the States a couple of weeks earlier, and Toronto was the first place I wore it.  What with that and my urge to play the tambourine occasionally, I'm sure you're all thinking “It's easy for him — he's a total extrovert”.  But actually I'm not, though I probably am more extroverted than when I took a test as a teenager and came out only two points from the bottom which meant “complete introvert”.  I'm a computer programmer, and I will happily sit at my computer for long periods without saying a word.  I'm still no good in social situations such as parties, which I get over by not going to them.  When I'm calling I don't adopt a totally false personality as some people do, but I emphasise some aspects of my personality and de-emphasise others.

So if you want to be a caller, read some of the notes in my Callers section and have a go — I recommend it!

On Wednesday, February 24, 2010, Hilary Johnson from North Yorkshire wrote:
I decided I wanted to be a caller the first time I went to a Barn Dance (on the Rectory lawn after the church fete, age 15) - I watched the caller and thought, "I want to do that".  I suppose the idea of being an expert, getting attention and making something as exciting as dancing happen appealled to me - yep, I was hooked first time!

When I actually started calling, age 19, at a club, I'm afraid part of my motivation was watching another caller and thinking, "I could do better than THAT!"

I'm still doing it.  Maybe there is an element of liking the attention.  But also I still like the idea of making dancing happen, where it might otherwise not be done at all, and helping keep the tradition alive.  I also like to think I'm passing on to other people the enjoyment I got as a teenager. At a good gig, anyway! At the more difficult gigs, maybe it's the challenge....

On Thursday, February 25, 2010, Colin Hume from Letchworth wrote:
Hilary - I agree with all of that!