Renata rented an allotment (from April 20th 2005) at Runnalow, off Bedford Road in Letchworth, and has been working hard there.  These two photos were taken on the fifth day.  Here she'd just made a start at both ends — the string indicating where the path will be is my contribution to the job.  It's officially only half a plot, 28m long and 10m wide at the front but only 2.7m wide at the back, as it's slotted in between two other plots which are at an angle to each other.  According to the agreement, it contains “five poles or thereabouts” — now there's a measurement that was obsolete before I went to school! 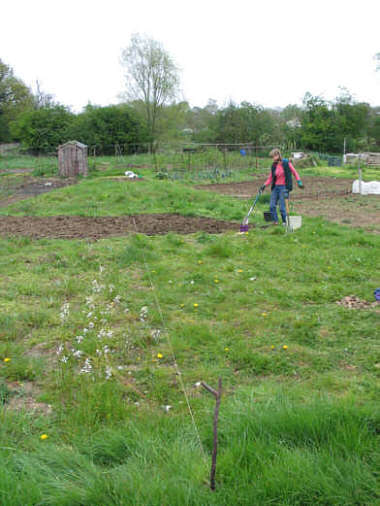 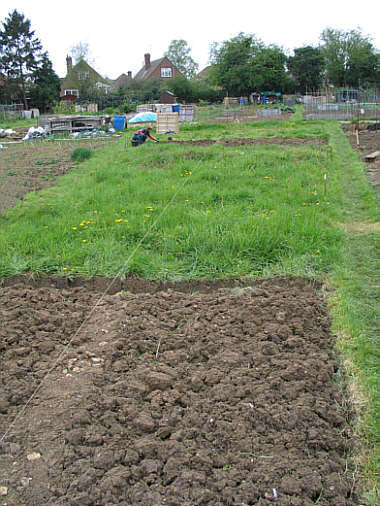 The shed in the first photo isn't hers — it's on the next plot — but she decided she needed one as well.  She managed to buy an ex-display model for £30 (including delivery) and it arrived just a week after she acquired the plot, impressing people on neighbouring plots — she obviously meant business.  A few days later she had created a few raised beds and planted some lettuces.

On Tuesday 26th April (in the rain) we collected all sorts of useful items (or junk, depending on whether or not you're a gardener) from the garden of a neighbour who died last year.  Around 2,500 plastic pots, a large water butt, a few tools, some lengths of rusty iron, a strange-looking wheelbarrow and all sorts of other odd things, plus a few plants which had been left and two 10 foot high trees.  Much of this has gone to the allotment, where old junk is de rigeur. 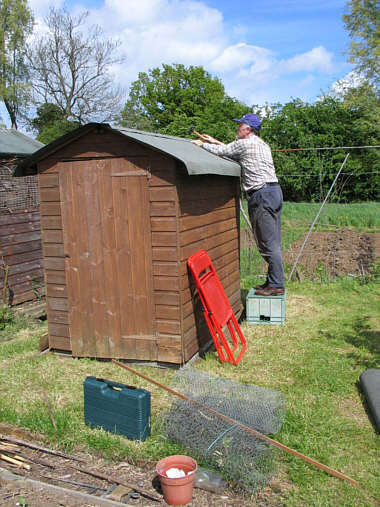 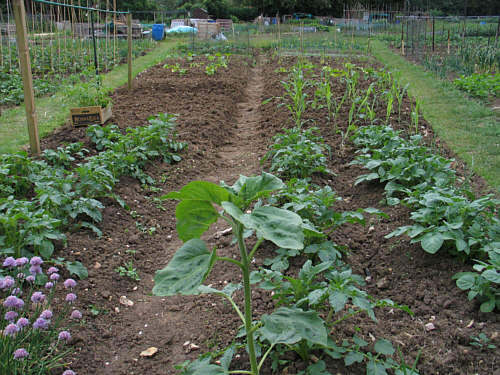 I replaced some of the planks in the shed, and we levelled the ground, put down some concrete slabs for a base and erected the shed.  The first photo above is from 3rd May 2005 when I was refelting the roof; the second is from 6th June and shows the raised vegetable beds complete and beginning to be occupied.  These days our dinner might include oak-leaved lettuce, courgettes (zucchini) and purple onions followed by strawberries, all from the allotment. 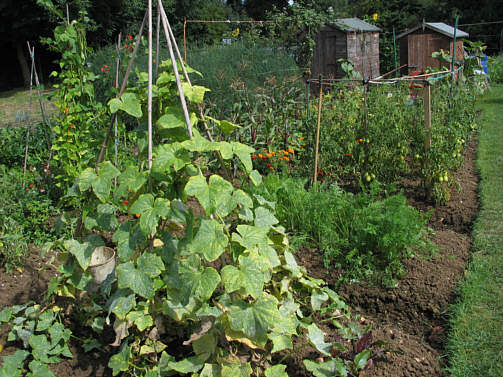 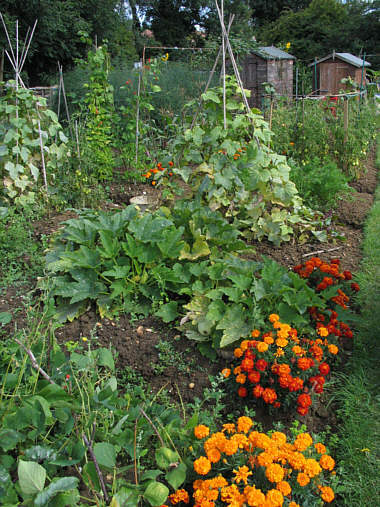 Here it is on 23rd August 2005, obviously in good shape.  I'm in danger of contracting cucumber poisoning, but apart from that I can't complain!  As you can see, there are even some flowers on the plot. 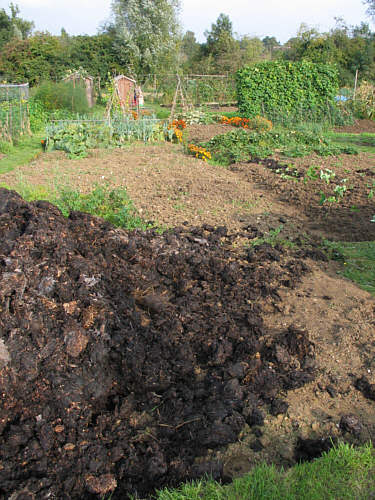 October 2005: Renata has now finished digging the final section, by the road, and she's planning to put raspberries and strawberries in there.  She'd just had a load of manure delivered, and was hard at work digging that in.  I have a horrible suspicion that in 2006 she'll be wanting a second plot.  In fact the man with the next plot is cutting down on his work, so Renata is working some of his plot too.

2008: The raised beds have gone, as Renata found the paths between them got full of weeds which were very hard to remove, since there wasn't enough room to work and the earth was solid from being trodden down.  Renata is now working as a professional gardener, with a number of clients all of whom seem very pleased with her work and willing to trust her making suggestions and buying plants.  And of course she's still working on her own garden, so the allotment has been neglected this year.  She's given up working the next plot.  She would hate the thought of giving up her own plot …

2009: Renata has had a bad back since November 2008 (no doubt brought on by too much energetic gardening — she works amazingly hard) and was not able to do anything much for several months; in the early stages I had to put her socks and shoes on for her and help her into and out of bed.  This would be bad enough for me, but at least I can do my computer programming with a bad back; she was just sitting or lying around feeling very frustrated.  She saw a chiropractor, a masseur, a doctor, a physiotherapist, an acupuncturist and an osteopath, and had an MRI scan which didn't seem very conclusive.  Finally she bought an exercise programme from a website in America and that seems to be doing the trick, though even at the end of the year she was still frustrated that she wasn't getting better quicker.  She's now also seeing a kinesiologist.  The allotment has run wild, and since she's now a professional gardener she doesn't have enough time for it even without a bad back, so she arranged for the daughter of some friends to take over most of it.  If the arrangement works out it will be ideal, as Renata won't have to relinquish the whole plot but won't have so much work to do, and I'm sure the daughter will benefit from Renata's expert advice.

2010: I was wrong.  Half-way through May the daughter had still done virtually nothing, so Renata has now retrieved the whole plot, and hopes that her back is strong enough now for her to do the work.

2017: Renata has decided she can't do it any more, though the decision caused her a lot of anguish.  She's also given up her gardening clients, and says that with her remaining strength she wants to tend her own garden.  We won't be renewing the lease in 2018, and she won't want to go back there and see that the new tenant isn't doing as good a job as she once did.

On Sunday, January 28, 2007, Anne from Cleethorpes wrote:
I have just got the key to my first ever allotment.  Your pictures are an inspiration! On Thursday, January 20, 2011, Keith Orchard from Warwick wrote:
Nice picture of you and the shed, Colin, (plus the allotment, of course) but how about one of Renata??? On Saturday, January 22, 2011, Colin Hume from Letchworth wrote:
That's her in the first two!